News
You are here: Home / News / Safety / Why you should leave welding to the Pro’s

You wouldn’t perform your own surgery would you? Well when it comes to welding, there’s a reason that certifications and training is required. Simply put: Men are idiots and welding is dangerous. Here’s a few examples of some of the not-so-brightest welding mistakes courtesy of the Darwin Awards.

2003 – A homeowner was doing some welding on the metal roof of his house. He had problems with his oxyacetylene tanks slipping, so he decided to tack weld them to the roofing iron. That was the last thing he ever did.

2004 – If you ever find yourself with a leaking fuel tank on your motorcycle, be sure to heed this lesson from a moron who decided to fix it himself. He removed the leaky tank from the bike and carried it to his sixth-floor apartment, where he drained the gasoline into a pail in his toilet. Considering what happened next, it was fortunate that nobody else was in the apartment, and that nobody was standing on manhole covers a block away.

He lit a propane torch, planning to solder the hole in the tank. Unfortunately, gasoline that had spilled on his hand caught fire. Frantically trying to extinguish the flames by plunging his hand into the toilet, he ignited the gasoline fumes coming from the pail. The toilet was engulfed in a ball of fire, and the explosion “shook the block.” Smoke poured out of the bathroom window.

That was just the beginning. Some of the burning gasoline spilled down a floor drain and into the sewer system, where it mingled with sewer gas and set off a massive underground explosion. Startled residents watched in amazement as one manhole cover was “blown to pieces,” and two others popped open. People fled their homes, fearing armageddon.

Of course, in cases like this, the idiot always walks away. The man survived all of this chaos with minor burns on his left hand. Of course, being the scholar he is, he refused treatment. 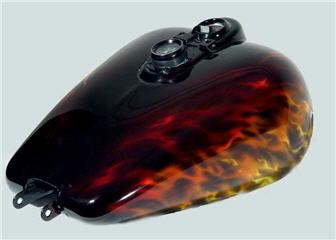 2005 – One fateful afternoon, 55-year-old Marko retreated to his semi-detached workshop to make himself a tool for chimney cleaning. The chimney was too high for a simple broom to work, but if he could attach a brush to a chain and then weigh it down with something, that would do the trick. But what could he use as a weight?

He happened to have the perfect object. It was heavy, yet compact. And best of all, it was made of metal, so he could weld it to the chain. He must have somehow overlooked the fact that it was also a hand grenade and was filled with explosive material.

Marko turned on his welding apparatus and began to create an arc between the chain and the grenade. As the metal heated up, the grenade exploded. The force of the explosion killed poor Marko instantly, blasting shrapnel through the walls of the shed and shattering the windshield of a Mercedes parked outside. Marko’s chimney was untouched, however.

Cannon Shell may be full of gun powder

2010 – A thirty-five-year-old man was only trying to fix a broken soil tamper, a tool his father had made himself and used for decades. The metal handle of this family heirloom had rusted loose and our genius welder-wannabe was trying to weld it back into position, but unfortunately he was welding the metal rod onto an antique cannon shell from World War II.

Yes, the family had been banging a cannon shell against the garden dirt for two generations! Generations of geniuses.

The heat triggered the shell to explode, mortally wounding the man. In his defense, he was sure the projectile was harmless because his father had used it to compact earth for almost 40 years.

If one generation doesn’t get it right, the next does.

2010 – Just because your dad’s a doctor, doesn’t mean you are. In this lovely case of mistaken credentials, a mechanic, thinking he was wise to weld, was killed when a tire he and his brother were repairing exploded. The two were attempting to repair a crack in a tractor-trailer wheel rim with a welding torch. A high school chemistry student can tell you that heating air in a sealed container, such as a truck tire, causes the gas to expand and the pressure to increase. But the brothers, who had been repairing tires for years, did not heed this principle and deflate the tire before fixing the crack.

The heat from the welding torch caused the air in the tire to expand until it exploded. Witnesses say that when the 4’ diameter tire exploded, the rim left the axle “with great velocity,” striking Robert in the head and killing him instantly. The force of the explosion was enough to knock a pickup truck off of a nearby lift, and there was no need to call 911, because the explosion was heard at the local police station more than a mile away.

You cannot just wake up one morning and say “I’m gonna be a welder today”.

2013 – One more for good measure. It doesn’t take a genius to realize that welding a gas tanker that’s full of fuel will explode and send you flying high 400 meters in the air. It may sound too dumb to be true, but on February 5th it happened to a brilliant mechanic named Sergio.

Welding is an art, a passion, but mostly a science. If you don’t understand its dynamics it can be a fatal mistake. It’s great to be interested in welding, but that doesn’t mean you should run to Canadian Tire and start practicing. There are many courses available and our staff can be a great resource for information. Be aware of the hazards around you before welding

Stay safe out there.

Proof that Winnipeg is great, even in Winter Driving on Ice – How to Avoid a Collision
Scroll to top